ALELUIA
«...described as "something between the bizarre and their classic sounds.»

Vooder escreveu:ALELUIA
«...described as "something between the bizarre and their classic sounds.» 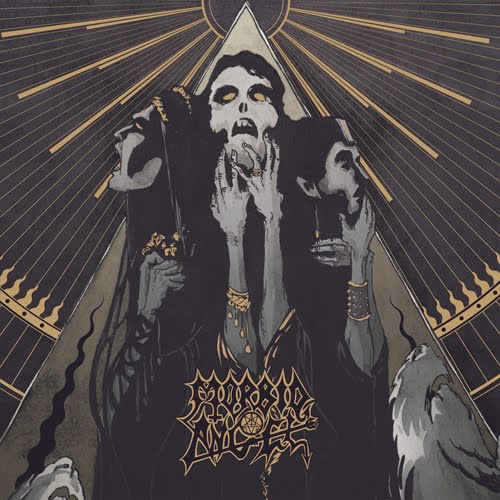 The artist stated: “To create this cover we worked from several references, ideas, elements, and I would say a ''world'' of options and paths. After a long brainstorming period and some [good and bad] ideas left behind we came up with the concept of this organic surreal insane being; a fallen God or a weird mirror image of our own madness. It is a different Morbid Angel cover for sure, but I think that's how Morbid Angel is...Deviant and different on each new release. They never repeat themselves. They are always pushing the boundaries and setting new standards. I'm really proud of the final results and hope the fans appreciate my work, while listening to the new album!”

Prior to the release of the album, a single for the song “Nevermore” will be out on May 16th as 7” vinyl and digital download. The B side is an exclusive version of new song “Destructos VS the Earth”, remixed by COMBICHRIST.

“Of all the remixes I’ve been asked to do I never expected one of the world’s most notorious death metal bands to have an interest in hearing their music on the dance floor”, COMBICHRIST mainman Andy LaPlegua comments. “However, ‘Destructos’ is one of those tracks that are so versatile that it could have been recorded as a folk song and it would still sound amazing. I’m honored to be a part of this project and am excited to see how the Morbid Angel fans react to this unusual new direction.”

The cover artwork for the single was designed by French artists Valnoir and Fursy Teyssier for Metastazis:

No, the new Morbid Angel full-length album isn’t just eagerly-awaited! Since they set, with their first four records, the kind of standard that 90% of the current death metal scene still works toward, simply put, ‘Ilud Divinum Insanus’ (due on June 6th) is like the second coming of Christ. Except with more blastbeats, guitar wizardry courtesy of Trey Azagthoth and, erm, an industrial vibe. And, trust us, it has a fair share of surprises along the way, which will sure test their long-term term fans' sense of loyalty. Terrorizer’s Olivier ‘Zoltar’ Badin was invited to sunny Marseille last weekend to meet the band's prodigal son David Vincent and have an sneak listen to the band’s new album and give us this exclusive track-by-track preview of a beast of an album. Controversy guaranteed.

1. 'Omni Potens (intro)'
A keyboard-based intro heralds the start of the eagerly-awaited new Morbid Angel album with a medieval twist that could have well been pulled from ‘Blessed Are The Sick”. Intended, says Vincent, to “set a dark and ominous mood” before the guitar kicks in. The first inkling of an industrial direction comes roaring out of the speakers, a preview of what’s coming next. For better for worst.

2. 'Too Extreme'
If few moments on ‘Ilud Divinum Insanus’ are bound to raise more than a few eyebrows, this is most of definitively one of them. Fusing extreme metal with weird robot riffing and a martial beat, à la Laibach, this is probably what Digby (Pearson, Earache boss) had in mind when releasing the ‘Hellspawn’ compilation back in 1998.

3. 'Existo Vulgore'
The first obvious Morbid Angel track. Fast and extreme, just the way we like. With a classic Trey Azagthoth solo too.

4. 'Blades Of Baal'
The first of two tracks that new guitarist Destructhor (ex-Zyklon) wrote. “This is one of the fastest on the record. I think (drummer and session member) Tim Yeung goes as fast as 260 BPM on that one,” says David. The video made available on YouTube last October of Tim in the studio was shot during the tracking of that song.

5. 'I’m Morbid'
Guess they didn't have Tom G Warrior in mind when thinking about that title track (R U Morbid anyone?)? But this is bound to be Wacken or Hellfest’s next official anthem. Built upon a spontaneous “Morbid! Morbid! Morbid” crowd chant, recorded during one of the band most recent European tours, its lyrics (“We stand invincible not just a dream/Straight from the underground/The gods are screaming”) are like a call to arms. If there's ever a successful ‘mainstream’ death metal song, this is the it.

6. '10 More Dead'
Also composed by Destructhor and based on the same kind of sludgy crawling as 'Where The Slime Lives', Vincent describes this one as “another really heavy song with full-on seven-stringed guitar”. This even has a classic thrash break in the middle.

7. 'Destructos Vs. The Earth/Attack'
Back to the techno, or least Morbid Angel’s definition of it. Big beats and all, with some kind of childish backing vocals. An almost, wait for it, danceable tune, with sci-fi lyrics. No wonder EBM Norwegian superstars Combichrist have agreed to remix it for the B-side of the forthcoming ‘Nevermore’ 7”, to be released a month prior to the album.

8. 'Nevermore'
You probably know this one already, as the band have been playing it since summer 2008. Once again, classic Morbid Angel to the bone; fast and furious. The first track written for the album and the first one brought on the table by Azagthoth when the band decided to work on a new record.

9. 'Beauty Meets Beast'
Though this is another heavy monster, when asked if it is the band first openly sexual song (“Oh beautiful child/Come to me moist/I’m the great connoisseur”), Dave answers with a smile and says; “It’s about it time don’t you think?”.

10. 'Radikult'
The album’s sore thumb. Even if Dave says he was influenced by “Dutch hardcore techno, you know gabba” for this one and that in the end, “it’s just extreme music”, it’s hard to know what the Ancient Ones would think of such lyrics as “We’re banging hardcore radical/Maniacal and animal”. This sounds like an unreleased Genitorturers’ track, Dave’s old White Zombie-inspired band, where he played alongside his wife Gen. In the worst case, Marilyn Manson rip-off accusations will fly faster than body parts. If one track on ‘Ilud Divinum Insanus’ is most likely to crystallise the controversy, this is it.

11. 'Profundis – Mea Culpa'
Back to the 'ominous' synth-empowered symphonic vibe of the 'Omni Potens' intro, yet this time with über-weird guitar work by Trey and another martial tempo that all of a sudden switches into overdrive mode. A controversial way to end a controversial album? Definitely!