Tanja - What significance/value does Metal have in your life?

Naamah Satana - Well, first of all, Hail and thanks for this interesting and different interview. For me, and picking my words in "The Black Throne Of Hell" album : " (Black) Metal is more than music, is inner essence. Is something that you need to breed every day. And is a kind of gift or magic that grows inside you and is kept until the end of our days...If you are a genuine, nothing will stop your devotion.

Tanja - For you personally: What does Metal stand for?

Naamah Satana - Metal is a way to stay in life, goes since our personality to our flesh.
I think it grows by influences, mostly of times, but when you find the real interest, you will search more and more by your own self. Is the genre more genuine, mystic and I felt its value since my first steps in my own life. Is one of the main treasures I have in this life to satisfy my desires and deepest emotions, definitely...

Tanja - How was your career as a musician?


Naamah Satana - Well, since early, I felt curiosity and interest by music, specially when I met Heavy Metal. So, I tried to be always inside that scene, with my own searches. I met my husband, coincidently my strong arm also in Infernal Kingdom and we change many information about Metal. Later I knew that he had a band, heavy, but not Black Metal Or death Metal.... something in the middle of two....really, the project was nice, but the other guys does not showed strength, only fun and appearance. Anyway, I helped with the lyrics for the vocalist, he never wrote anything to sing in the rehearsal room, baah. One day he did not appear to the rehearse and Demogorgon defied me to sing my lyrics....well, we look around and we told: wow, this is fucking Black Metal! Since that day we create our serious band, Infernal Kingdom, but we cannot forget that the roots were created in StockMorto, the first band that we had in 1998, around of all the history that I told you before. Besides that, I like very much of drums, so I have a side project also with Demogorgon where I can play drums. But this is a project with no fucking compromises, nothing connected with Infernal Kingdom. Infernal Kingdom is my priority, more than other projects or invitations. I already received some invitations to participate in some other black metal bands as guest in their albuns or permanently but unfortunately I refuse, I do not have time, neither would have the same dedication to my band, not even for their bands. So, I will keep doing my lyrics and vociferating them in Infernal Kingdom music.

Tanja - How did you find to Metal?

Naamah Satana - I think that told you before, by other words, but for me, Metal was already present in my teenage times. I had old fucking metalheads as friends and for my family at this time was a problem. I liked to be with people more old than me, maybe for a kind of experience, knowledge and including that they liked Metal, for me was magnificent. The spirit, the cult, the passion, the purity inside the movement...was my key to wisdom. And of course with Demogorgon, I also learned some things with him, but in a point I think the knowledge was mutual, because besides this, my search was growing and growing, so I arrived at one point that was me showing stuff to him that he never heard before...and now, it`s the same…we are getting older, but always learning with our own experiences.


Tanja - Is it important for you that you aren’t only a consumer but that you’re also active in the scene?

Naamah Satana - Definitly yes. Since I was a consumer, I always had the wish to create my own art. Was and is fascinating for me, listening great masterpieces and see some supreme live rituals...why not to do it? I think the pure entities with full devotion must give their contribution to this path. And of course, we are one of them.

Tanja - Metal is masculine – would you agree to this statement?

Naamah Satana - It is a sexist statement, so as you can imagine, I don`t agree. And I tell you more, for me Metal does not have gender. Metal is inner essence, nothing about genres or politics. Is in your own blood, women or men, does not care. Both have the same right to do this, since they have the same wrath and magic necessary, are both capable of doing that in the same conditions.

Tanja - What image do you have of women in Metal?

Naamah Satana - The same than men...some of them are good and others are bad. Focusing your question, I think a big part of women/men are, definitly, inside Metal, but some others are just confused, if you can understand me. Sometimes some “known people", the internet, meet people, exhibitionism, reverie or illusion can fascinate you with this circle that transpires rebellion, but deeply inside is the opposite from yourself and very different from what metal really is.. So this is just an illusion or even a period. But the big stupidity of those trends, is the meaning that they give to metal, completely opposite. Basically, They are here just for fun and to be popular, I don´t know very well. Come and go. Well, but as I told you in the first line, this situation is similar to both genders, since my opnion about that, I generalize.


Tanja - There are some Metal-bands which have sexist lyrics that are sometimes even misogynic . What do you think is the reason for that?

Naamah Satana - The only reasons that I see are frustration or....fear of women. Fear for inferiority, lost of control...never symbolizes power or strength to me, just weakness. And the Metal-word speaks by its own seed...never, but never Metal have to speak about these shits.

Tanja - Did you ever feel not having been taken seriously or not being accepted due to your gender?

Naamah Satana - In the beginning of my insertion yes, was a long time ago, some assholes, fortunately few, including from other bands, they thought that I was a kind of whore or just a girl having some fun in the metallic scene. They tried to intimidate me with their conversations of shit. But I never stopped, neither gave them answer back. I just ignored them and feel the powers of darkness into my veins. Today is the day that it never happens, I feel respect from everyone inside the underground Metal scene, mostly in Bm, for the reasons that you know.

Tanja - How are you judged in Metal especially as a musician? Do you feel that people draw distinctions due to your gender and that there are a lot of cliches?

Naamah Satana - I don`t know very well, honestly, my mind is only mine. Each one have yours...and I must confess you, I hate flocks. But I have conscience that this piece of shit is full of flocks. So is normal if the majority makes distinctions, even today, between the work of 2 or more maniacs, judging their genders and not the quality of their arts, firstly. For me is indecent.

Tanja - What do you think: why are there actually so much more men than women in Metal?

Naamah Satana - Good question...the men begin the metallic scene as majority, is true...but in the 80`s, the women were already in Metal bands, but always in minority. And some women of that era, keep up with their bands in active, until the current days. The pure warriors will prevail forever, excluding genders as I already said, only entities. I think in other subjects Is the same problem, for example in some specific jobs, women are totally "excluded" to do it. I think in metal the problem is similar, the lack of trust of men by women to do a band. Is more or the same attitude sexist, that writing about that. Is a question of attitude. I can give you an example, in my country, there are more and more bands of Black Metal and Thrash. But it is not the same that say that the quality is growing also,.Here is the same thing, the quantity is not equal to quality. So is a question that makes us think deeply....

Tanja - They say that women in Metal often act consciously male for being accepted better. Do you ever have the feeling that you (have to) repress (anything of) your femininity?

Naamah Satana - Well, there are some things that you should preserve...the worship for the cult is embraced by feelings, collections, concerts, attitude, devotion and all around the emotional side. But also by the image. The image is important, in the point that you are completely incarnated by Metal. So is impossible to destroy the roots of the movement. You are a follower. One of the points to follow are the clothes. Leather, metal t-shirts, bullets, patches, pins, spikes ....but this is the cult! Other thing is having reactions of a men for being accepted better. That I do not agree. You must be genuine and have your own personality. Just like that, you reach the pinnacle of your inner strength…

Tanja - In what way are Metal-women different to those who don’ t listen to that kind of music?

Naamah Satana - Depends from the intelligence and way of life from each one...if they are smart and cult, they will respect, if they are stupid they will think that we are crazy and they are the kings of the world. But honestly I don`t care about those assholes, they will never find their really essence.

Tanja - Theme „feminine attractions“: Do you think that it’s okay if Metal-musicians use them, or is it destructive for the acceptance/ equality?

Tanja - Are there Metal-Bands with female musicians that you like and that you also can recommend?

Naamah Satana - Yes, there are good bands, inside of Black Metal, Darkened Nocturn Slaughtercult is the one of the best, Demonic Christ is also good, in audio version I recommend Tymah, in Death Metal Sinister or Funerus, the old classic Nuclear Death, Détente, The Great Kat...they are just some great examples...

Thanks for your interview! Keep the good work alive! 6 6 6 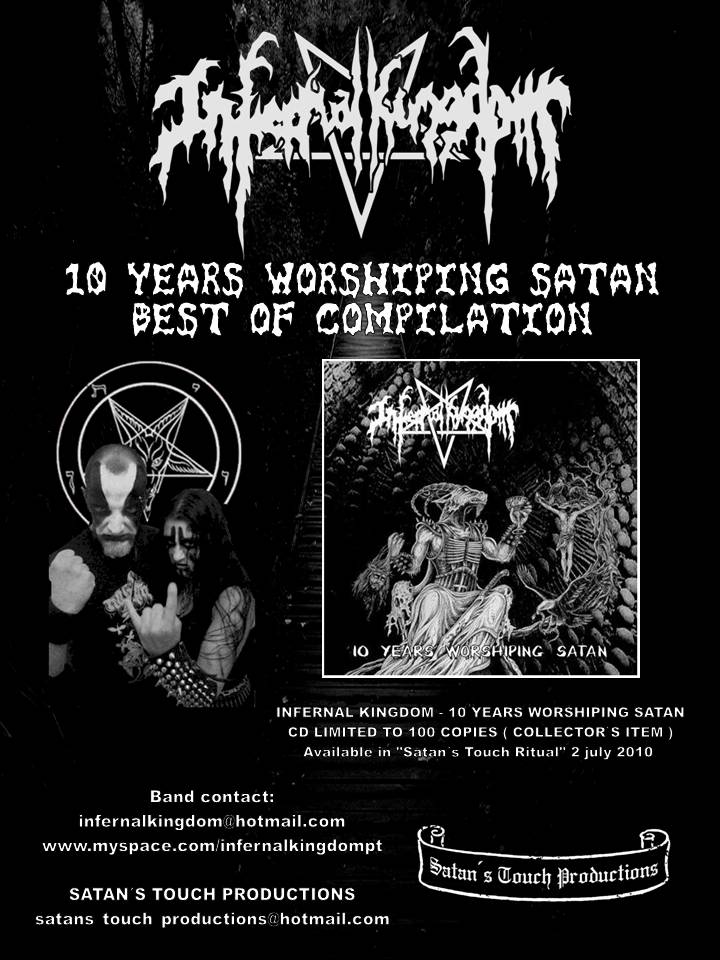 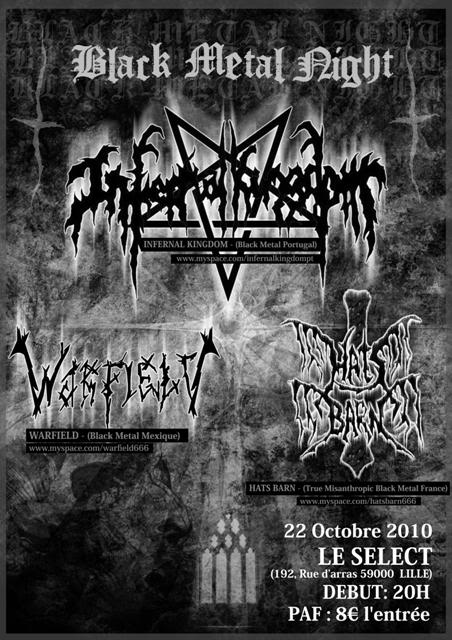 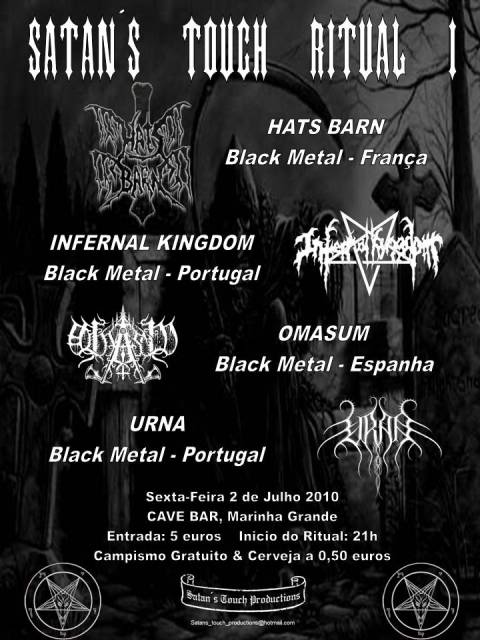 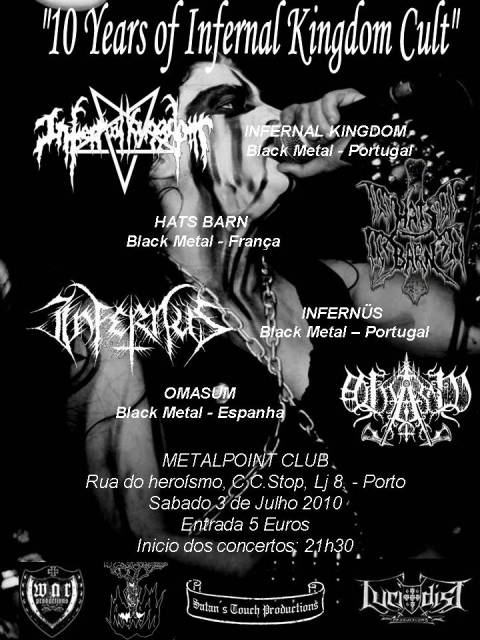 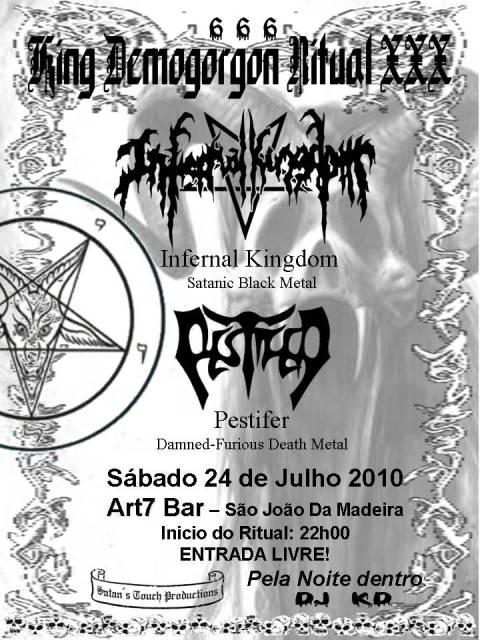 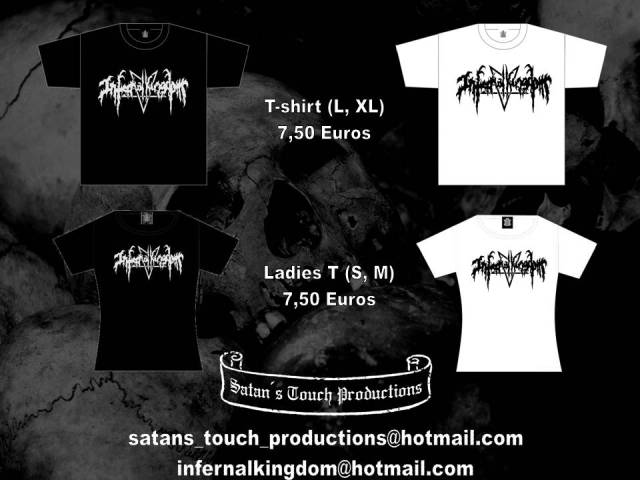 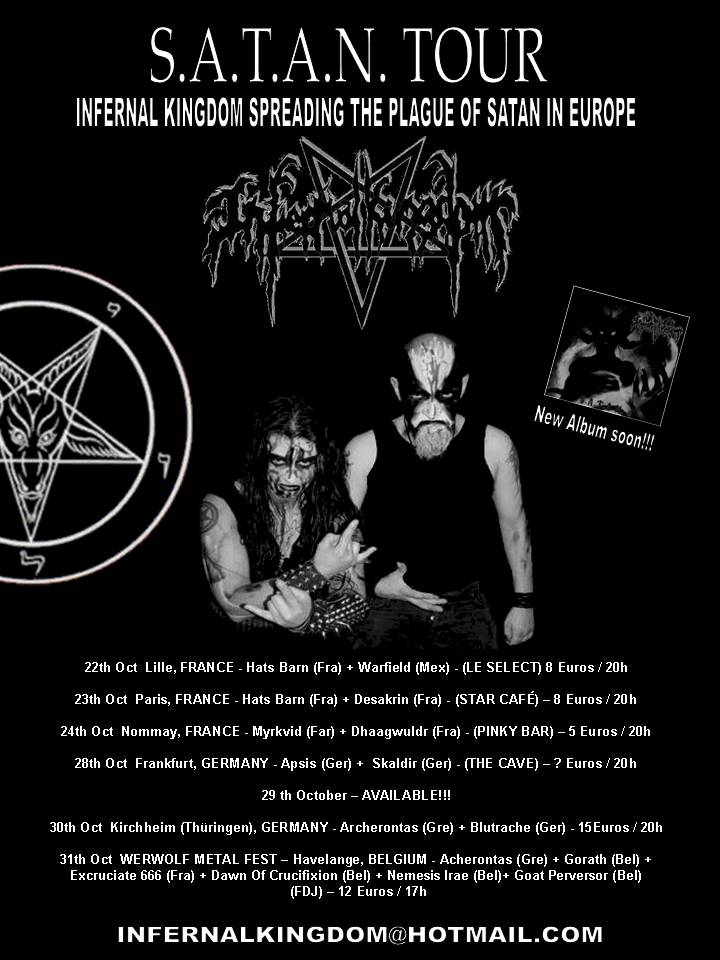 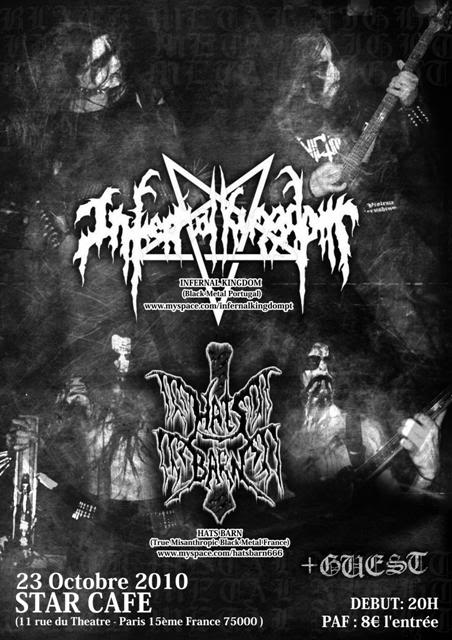 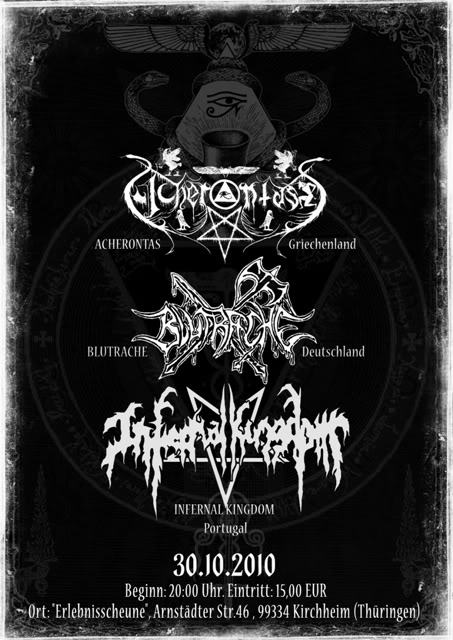 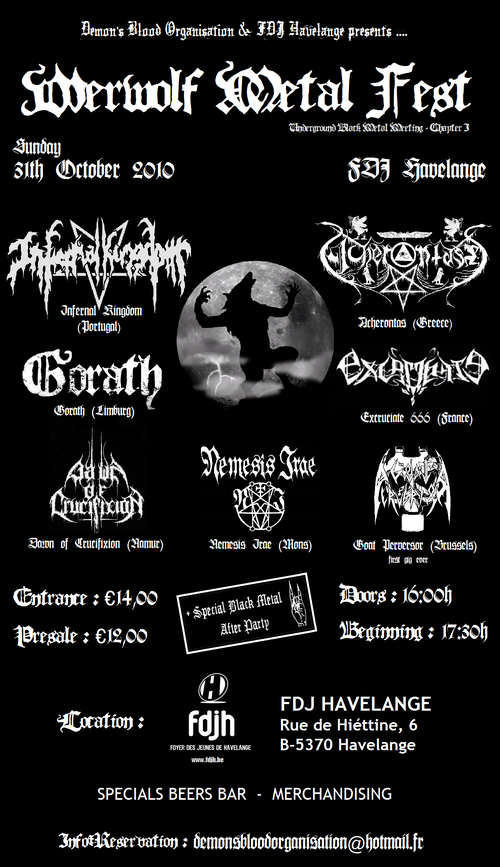 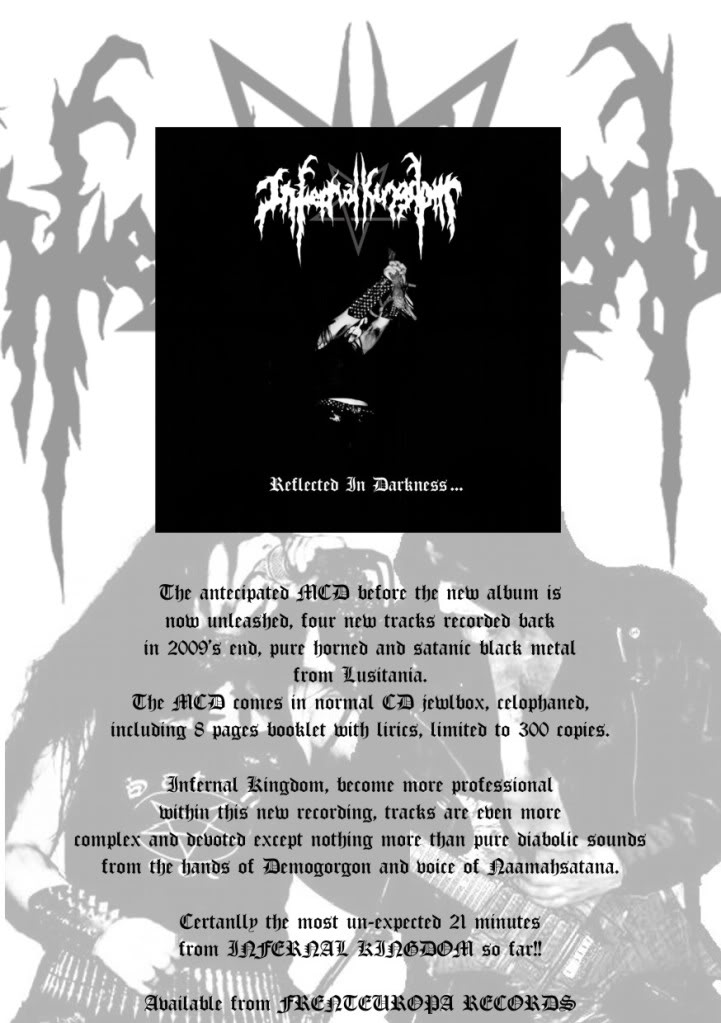 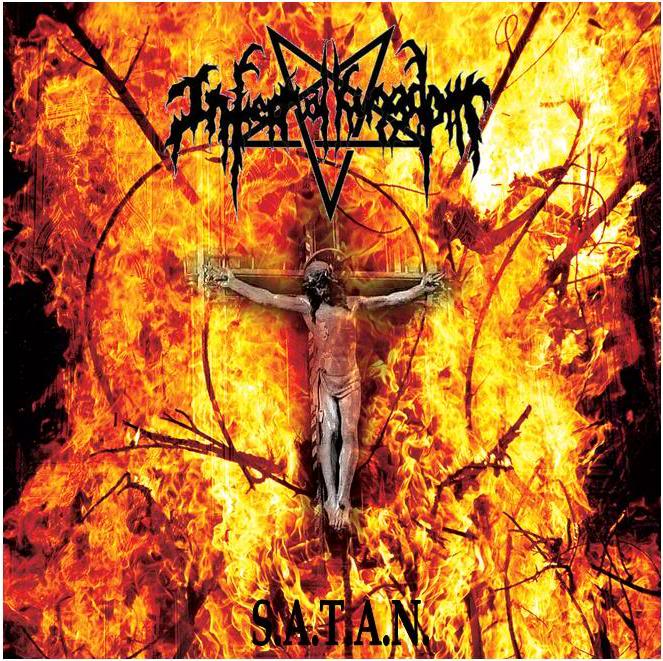 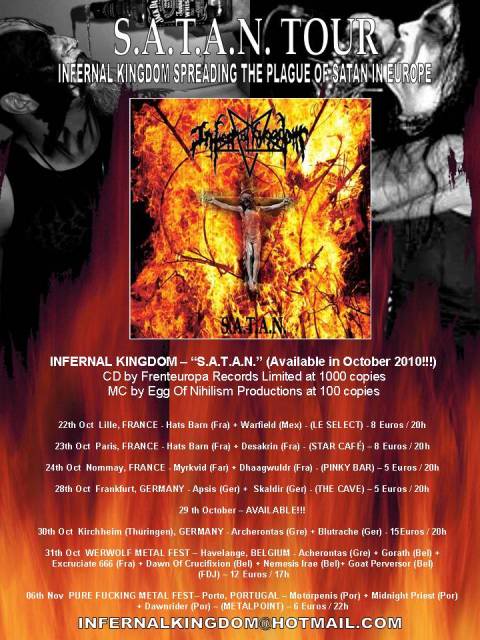