LP NOTRE DESSEIN - Comme Une Mer De Verre 13€
The "no drums" depressive BM solo-project of LaMort (DE GRÂCE, WERMUT, IWIK). Widely inspired by the Revelation of St John, "Comme Une Mer De Verre" takes the listener on a profoundly desolate and breathtaking prophetic journey to the end of times. He that hath an ear, let him hear what the Spirit saith... Lim. 212x. 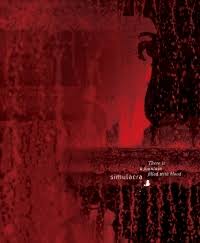 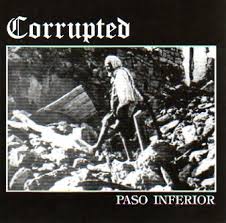 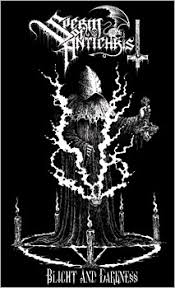 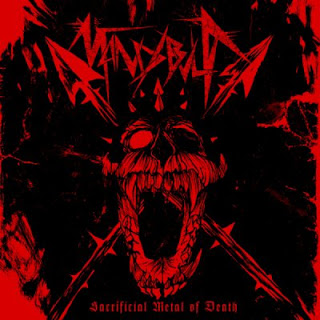 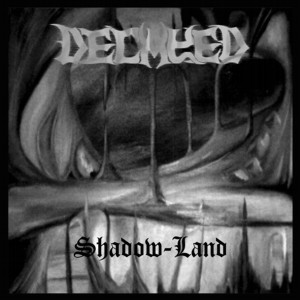 Alkerdeel "De Speenzalvinge"
Let me tell you something: I don’t know shit about metal. Don’t ask me the difference between sludge metal and doom metal, or the difference between black metal and death metal, for what it’s worth. There are these dudes from Silvester Anfang who tried to explain me, but I loose interest in about five seconds. Maybe I’m even more interested in the whole imagery of all things metal than in the music itself.
And than here’s Alkerdeel, from Zomergem, Belgium. You could translate Zomergem as: Summertown. A black metal band from Summertown can’t be wrong. I only know two members of Alkerdeel. One works for a big media concern, the other organises a summer festival by the sea that has Tori Amos as its headliner this year.
Ever since reading Franz Kafka, I love people with a double life. Being original and true in truly overrated. Fake it like a man. Yes you can. I never liked anarchists in punk clothing. I like my eccentrics in suits. Like the beatniks. I like my geniuses dressed sharp, like John Coltrane on that famous picture by William Claxton: a black man in a black suit at the completely white painted Guggenheim museum. That’s class.
Leave away the in between, go for the extremes. As white as an empty room in the Guggenheim museum. As black as De Speenzalvige by Alkerdeel. Print your graphics and liner notes in black on a black piece of paper, as they do.
The Austrian conceptual artist Erwin Wurm says that art often fails when it tries to tell something about real live, and, because of that, becomes a cheap and small imitation of real life. A Mini Me of real life, in other words. So don’t try to be real in art or music. Dare to be over the top, dare to be XXL, dare to be a cartoon. Like Ozzy, like Lemmy, like Alkerdeel.
And than there’s the music: it’s recorded on tape in a piggery on a farm. The high hat often sounds too sharp and too loud. The vocals are often too quiet. The bass, guitar and drums sound like one big porridge of sound. In other words: totally awesome. De Speenzalvige contains three songs and more than one hour of sound. Again: totally awesome!
I think I like this band. I think I like them a lot. Maybe I even should get to know a bit more about all things metal, with a good mentor. I can be a good discipline, you know, obeying my master. Master! Master! 8/10 -- Joeri Bruyninckx (2 June, 2010)

UT25 GORGONTONGUE – The Lighter Side of a Suicidal Mind CDr
4.50€+ctt

ALKERDEEL De Spleenzalvinge
Brand new record from these blackened Belgian weirdoes, whose sound has changed dramatically from our first exposure to these guys, the grim noisy Luizig cassette, releases on Silvester Anfang's Funeral Folk label, which seemed apt at the time, a raw grim lo-fi sort of abstract black metal, along the lines of the blown out primitive fury of groups like Bone Awl and Akitsa, everything in-the-red, blown out and utterly chaotic and noise drenched. Not sure if you can just chalk it up to the natural progress of a band, but the now out of print 3" cd-r on Universal Tongue found the band shifting their sound considerably, tighter, not so distorted or damaged, yet they managed to make this shift and remain as head cavingly baffling as ever. Which thankfully remains the case here, three new loooong tracks of stripped down trancelike minimal black metal, that sounds almost more like some sort of noiserock or noisy krautrock. The band lock in a riff, and a blasting beat, and just pound away on it, over and over and over, the sound gloriously murky and muddy and blown out, the only things that really change are the vocals, which howl and mewl and shriek, occasionally becoming engulfed in reverb or delay (dub style) and spinning into a swirling cloud or processed voices, and the drums which shift from minimal pound, to super sizzly cymbal driven cacophony, the opening track finds the band spending most of their time pounding away relentlessly, only to shift gears about halfway through, get a little doomy, and then shift gears again and get all abstract and spaced out, sounding more like some weird sort of underground post punk band that any sort of black metal band. They do of course return to the murky muddy pound that started things off, only to stumble and collapse into heap of feedback and black buzz.
The second track is a super stripped down, minimal chunk of slowcore, abstract, doomy, but not heavy, just simple drumming, and skeletal guitars, it does eventually lurch into something more heavy, filthy and crusty, with sick vomited vokills and super distorted downtuned crunch, but it quickly slips right back into that doomy dirge complete with Sabbath style basslines, eventually exploding into a weirdly proggy almost Voivod sounding black metal workout, with long stretches of woozy bass driven doomy drift, and some super dense blowouts of churning riffage that is more dronelike than metal-like.
The final track is a 29 minute juggernaut, which begins with a cloud of grinding low end blackness, the drums eventually coming in, creating some sort of motorik hypnorock blackmetal dronedirge, which splinters into something way more frenzied and chaotic, and from there, the track is constantly shifting, long stretches of cinematic strings and mysterious samples, Khanate like ultradoom, more meandering downtuned metallic post rock, super spaced out minimal sludge, laced with ethereal vocals, and weirdly melancholy melodies, bursts of bass heavy prog, some Burzumic black metal, and finally a blast of frantic almost D-beat sounding blackened fury that finishes things off.
Another fantastic and fucked up batch of damaged doom and abstract avant black metal weirdness, needless to say this is the kind of shit that we live for. WAY recommended.

GORGONTONGUE The Lighter Side of a Suicidal Mind (Universal Tongue)
What do Aidan Baker, Gnaw Their Tongues, Alkerdeel, Persistence In Mourning, Caina and Expo 70 all have in common? Well they've all released records on ultra cool Portuguese micro label Universal Tongue. And to that list you can add these guys, the strangely named Gorgontongue, one part Arizona black metal outfit Ganzmord, one part Oklahoma funeral doom horde Persistence In Mourning. Although the parts don't necessarily predict the whole in this case, as The Lighter Side of a Suicidal Mind is not in fact metal, black, doom or otherwise, instead this duo are exploring some grim, haunting, oppressive black ambient otherworld, blending soft noise, field recordings, mysterious murky effects, layered drones, much of this sounds like a prettier, less harsh Gnaw Their Tongues, sort of epic and cinematic and dramatically doomy, but also a bit like a more grim blackened Expo 70, that same sort of glimmering slow burn kosmische krautdrone, but laced with strange processed vox, crumbling industrial detritus, swaths of wheezing organs, buried barely audible rhythms, the occasional hellish shriek, tangled bits of detuned acoustic guitar, dubbed out electronics, ghostly vocals, woozy arpeggiated melodies, keening feedback, bits of Dead C like free rock drift, sprawling expanses of space-y ambience, various bits of crash and clank twisted and transformed into strange sonic streaks, rumbling low end pulses, crumbling walls of corrosive metallic crunch, tinkling chimes, all drifting through epic black expanses and dense squalls of psychedelic abstract effects-damaged buzz, culminating in the near meditative final track, a haunting, black ambient driftscape, hushed and haunting and weirdly lovely.
LIMITED TO ONLY 100 COPIES!!! Housed in a Blue Ray style dvd case, with a printed two sided front cover, and a printer insert / mini poster. 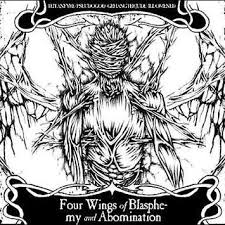 Emitted from a dim-lit hate cellar, also occupied by Gnaw Their Tongues and Silvester Anfang (Morries of GTT mastered this recording and Willem of SA recorded it), the full-length debut of Alkerdeel arguably takes one step forward and two steps back, containing one new track, 'Verdestelweern', along with new versions of 'De Bollaf!' and 'Luizig', tracks taken from their previous two releases. Seeing as how Alkerdeel have been about as underground as an agoraphobic mole, this album gives the hipness-impaired a chance to catch up with this fucked-up Flemish filth. Recorded unto tape in single takes 'De Speenzalvinge' exudes necro attitude and spaced-out obscurity, shifting between frenzied lo-fi chunder à la Ildjarn and the downtuned caveman doom of Beherit, with the 29-minute 'Luizig' chucking in strangulated piggy squeels, Japanese movie dialogue and wobbly violins for pure gratuitous bafflement. (7,5/10 - Simon Collins)

GORGONTONGUE The Lighter Side of a Suicidal Mind
When doom and black metal come together in the dark of night, it can usually lead to one thing... blackened doom. With this having become a phrase as ubiquitous in reviews as "brutal", this overpopulated stream throws up more than its fair share of generic shit. Thankfully, this pairing of the two genres, black metalling Ganzmord and Doomers Persistence In Mourning, takes things in a wholly otherly direction. More abstract than either of the separate enterprises, The Lighter Side of a Suicidal Mind is more a series of interlaced soundscapes than a traditional metal album. Sure enough, there are moments of tangible aggression, like the Hammer House of hammered faces effect of When Hell Glutted on Humanity, but mainly it's a series of deep aural oil-slicks. In the places where sounds are barer and the DNA of the morass can be seen more clearly, things begin to fray. The deeper parts are where the (black) magic lies. When sewage sounds hit digital decay and it all goes hellwards, this is when Gorgontongue feel at their most brilliantly unnatural.
Scott McKeating
5/6
5=exceptional 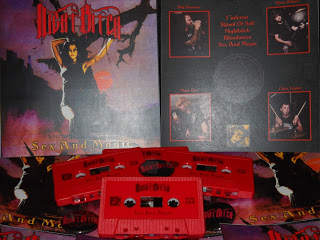 Bio:
NightBitch is the Connecticut based occult heavy metal band featuring Hour of 13 frontman Phil Swanson (vocals) and Hour of 13 live session members Ryan Adams (guitar), Chris Taylor (drums) and Mark Eles (bass). They are currently playing shows throughout the Northeast US with the likes of Pentagram, Midnight, Black Pyramid, Earthflight, Valkyrie... They will be appearing in Ireland in September and have shows booked throughout the remainder of 2010. NightBitch is made up of veteran CT musicians all with their own lengthy resumes. They have joined together in NightBitch to bring back melodic traditional heavy metal elements to the state of Connecticut in its purest form.